Type of strategy: Energizers and State ChangersGamesMovementOpeners & Get to Know You

Throw balls to others in a sequence, using each person's name. Works every time. Can be extended to "Warp Speed" (to see how fast the group can throw balls through a set order to each group member). 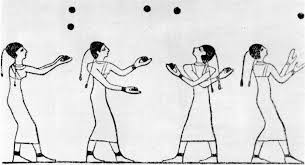 Set up & instructions for 1st round of group juggling

Arrange participants in a circle, not too close, not too far from one another

Include yourself in the circle

If you're not trying to learn names, skip the naming part & just throw!
The challenge from here is simply to get the ball thrown around to everyone in the circle, and finally back to the trainer.

2nd round of group juggling

▪ I then say, "Right, well done, now let's see if we can that again - making sure we use the same order, and using each other's names.  Remember to say the name of the person you are throwing to, and thank the person, by name, for throwing it to you, OK?"
▪ On the second round, most people will be challenged to remember who to throw it to, and the two names!  Take it slow, help the group out, so that each person has a successful second round.
3rd round of group juggling
▪ I then say, "Good, so how about we do it again, but this time, let's let's see how fast we can do it, OK?  Here we go...Hi Freddy, my name is James...." [throw]
▪ It will go pretty fast this time, and the group will probably feel quite pleased with themselves.
4th round of group juggling - introducing more balls
▪ I then say, "That's great, but I think you can do faster than that.  Come on, let's see how we can really go..." [I then throw and say the name with super fast enthusiasm to set the tone!
▪ After the first ball has passed through a few hands, I take a 2nd ball out of my pocket (surprise!), and casually, but earnestly say "Hi Freddy...." [throw].
▪ By now everyone is so well trained, the 2nd ball will automatically keep going, and there will be a detectable sense of challenge/excitement.
▪ After a bit, I introduce a 3rd and 4th ball, up to about 6 balls.
▪ Usually I let 4 to 6 balls be juggled for a while (note the balls will be coming back again to the trainer - just keep them going).  A group of 12 adults can usually handle 4 to 6 quite well.
▪ If I'm feeling conservative, I just let the group have the success of doing this number of balls, and collect them in when that seems to have been achieved.
But usually, once the group seems competent at 4 to 6 balls I gradually then introduce an unmanageable number of balls into the juggle & maybe also weird objects (e.g., kids soft toys) which all gets crazy, fun, out of control, etc. and ends in a hilarious shambles.